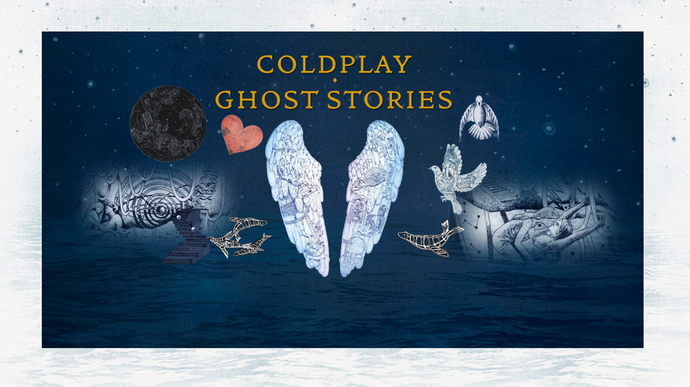 Ghost Stories is the sixth studio album by Coldplay. Co-produced by the band with Paul Epworth along with returning Mylo Xyloto producers Daniel Green and Rik Simpson, it was released by Parlophone on 16 May 2014. The album was released by Atlantic Records in North America on 19 May 2014. It is the first album by the band in North America under Atlantic, after Coldplay were transferred from Capitol Records in 2013, following the purchase of EMI and its assets by the Universal Music Group in 2012.

The album was recorded by the band throughout 2013 and 2014 at the band's purpose-built home studios in London, England, and in Los Angeles. It features guest producers Avicii, Timbaland and Madeon, and the band's frequent collaborator Jon Hopkins. It was heavily promoted by the band and Parlophone in the lead-up to its release, with an accompanying prime time TV special, a visual album, and a special six-date promotional tour of the album, as well as various appearances on television and radio. Although the album had the band experimenting with electronic music, like on Mylo Xyloto, that album was more upbeat. This album was quiter with a more ambient sound. This was due to the personal turmoil Chris Martin experienced from seperating from his wife, Gwyneth Paltrow.

In 2011, Coldplay released their fifth studio album, Mylo Xyloto. Originally conceived by the band as a "stripped-down, more acoustic collection", it became one of Coldplay's most experimental and pop-oriented records to date, being described as "luxuriously colourful" where "the choruses are bigger, the textures grander and the optimism more optimistic." Produced by Markus Dravs, Brian Eno, Rik Simpson and Dan Green, the album peaked at number one on 18 national album charts and was certified Platinum in 16 different countries. Mylo Xyloto had also sold 8 million copies within the first year of release. Coldplay's 2011 single, "Paradise", became the band's second UK number-one single after 2008's "Viva la Vida". Coldplay's subsequent world tour in promotion of Mylo Xyloto visited North America, Europe, Australasia and Africa, raising $99.7 million in revenue.

Going into the creative process for their sixth studio album, the band wanted to return to the "stripped-down, more acoustic collection" they had stated their fifth album would be, returning to the original idea of an acoustic-oriented album, with less of the production and sound that made Mylo Xyloto.

Ghost Stories is a spiritually driven album that revolves around two major themes mentioned by lead singer Chris Martin. The album explores the idea of past actions, and the effects they can have on your future and one's capacity for unconditional Love.

The creative process and recording sessions for the band's sixth studio album took place between 2013 and early 2014, at their purpose-built studios The Bakery and The Beehive in North London, England, then in Los Angeles for the final process. The creation of the album actually started at Guy's house in London in early 2013 where he had settled a little studio where everyone gathered to jam and try some new music during a break after the band's big tour for Mylo Xyloto. The band took a different approach for their sixth studio album in contrast to their previous studio albums. Chris invited the band to contribute original songwriting material for the album, as opposed to building songs off Martin's ideas as they had done during previous recording sessions. For example, "Magic" was built off a bass riff originally conceived by bassist Guy Berryman in the studio.

“For a long, long time I've been begging the band, "Please could someone else start a song"! I've been given that gift from the universe, or from God or whatever you want to believe in that ideas for songs get sent through wherever they get sent from, and then I take them to the rest of the band and then we layer it up and that's how we do it. I was so grateful. It made me so happy and that was kind of a sample of the album as a whole, "We'll help each other out here". There were lots of songs but that was the first point where I thought, "Everyone is invested in this, everyone knows what we're trying to do; go a bit more personal". ” —Chris

The album artwork for Ghost Stories was etched by British-based Czech etching artist Mila Fürstová. The medieval art-driven artwork, measuring 100 by 100 cm, features a pair of angel wings imposed onto a painting of an ocean under a sky at night. The angel wings themselves feature cryptic imagery of medieval-style drawings of fairly contemporary objects and concepts. The images include a couple in love, a man facing a mirror, a flight of white doves, a circular maze, a girl by candlelight, a window looking out onto an incoming tornado and a garden plant with a ladder, amongst other imagery depicted in the artwork.

A larger, digital version of the artwork is available on Coldplay's official website, with the ability to zoom into the artwork with a screen magnifier.

Fürstová had etched the artworks for all of the releases in the Ghost Stories album cycle, including the artwork for singles "Magic" and "Midnight", which all use the same motif of a scenario taking place in a larger body. Fürstová, whose work has been described as "dazzling images are both contemporary and personal, searching in the surreality of dreams, tales and fables that can map the framework of our consciousness", and has won numerous awards, including the Royal College of Art Society Award in 2001 and becoming the youngest academician at the Royal West of England Academy in 2009, was invited by Coldplay to etch artworks for their new album in January 2013.

She described the collaboration between her and the band as "a most inspiring journey and a truly humbling experience to cooperate with such talented people". There are plans for an exhibition of Fürstová's Ghost Stories artworks in the Autumn of 2014 in central London. 25 original etchings and 100 high-quality digital prints of the artwork, all hand-signed by Fürstová, are also set to go on sale on 19 May 2014, the same day Ghost Stories releases in the United Kingdom and the United States.

Main article: Ghost Stories Tour Coldplay performed on the opening night of the televised 2014 iTunes Festival at SXSW on 11 March 2014 at the Moody Theater in Austin, Texas. In addition to performing "Magic" and "Midnight", the band performed "Always in My Head" and "Another's Arms"; the first live performances of the four songs. The band also performed "Magic" in a pre-recorded segment of Sport Relief 2014, which aired on BBC One on 21 March 2014.

In April 2014, Coldplay announced an international scavenger hunt for sheets containing lyrics to the nine songs on the album. The notes, handwritten by Martin, were placed in ghost story books in libraries around the world, with the band tweeting clues leading to their locations. One of the hidden envelopes also contained a special Golden Ticket, allowing its finder and their guest to go to London for the Coldplay concert at the Royal Albert Hall in July.The lyric sheets were found in libraries in Mexico City, Singapore, Helsinki, Barcelona, Dartford, New York City, Tauranga, Dublin and Johannesburg.

Always In My Head Lyrics

A Sky Full of Stars Lyrics 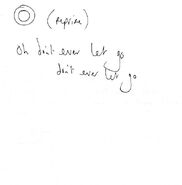 O (Reprise) Lyrics
Add a photo to this gallery

A TV special titled Coldplay: Ghost Stories was filmed March 21–23, 2014 by the Grammy-nominated director Paul Dugdale on a custom-built stage in a Sony Pictures movie soundstage in Los Angeles. Coldplay performed material from the album in its entirety for the first time. The show, which included cinematic vignettes and 360-degree projections, was attended by an audience of 800 fans and press, and was broadcast in prime time in several countries in May and June 2014. The special was then sold on DVD and blue ray in November 2014. Additional footage was shot at Paradise Cove in Malibu, California and at Woollett Aquatics Center in Irvine, California for the film. Chris Martin said, "The Ghost Stories show at Sony Studios was a very special moment for our band ... This film is basically our original vision for the Ghost Stories album." Coldplay was also the musical act for the 3 May airing of NBC late-night sketch comedy show Saturday Night Live and performed "Magic" and "A Sky Full of Stars". It was the band's fifth appearance on the show.

On 12 May 2014, seven days before its release date, the album became available to stream in full via iTunes, accompanied by an animated video revolving around Fürstová's album artwork, but the band refused to allow Spotify, Beats Music, Deezer, and Rdio to stream the album until 22 September 2014, which they had previously done on their last album, Mylo Xyloto .

"A Sky Full of Stars"

Ghost Stories received mixed to favorable reviews. At Metacritic, which assigns a normalized rating out of 100 to reviews from mainstream critics, the album received an average score of 61, based on 31 reviews, which indicates "generally favorable reviews". Jason Lipshutz of Billboard wrote the magazine's track-by-track review of the album, praising it as the band's "most listenable album in years" and describing it as "an evocative concoction of sullen phrases, sparse arrangements and powerful themes." Kyle Anderson of Entertainment Weekly commented that Ghost Stories "will likely be remembered as a transitional album" and noted that "while being solid, it feels like a prequel to something better".

Larry Fitzmaurice of Pitchfork Media wrote that the album is a "subdued work that finds Chris Martin and his band crisply moping through mid-tempo soundscapes and fuzzy electronic touches that have the visceral impact of a down comforter tumbling down a flight of stairs." Nick Hasted of The Independent wrote that Martin "accepts his loss too meekly to approach the anguish of a great break-up album", but concluded that the band's "step away from grand platitudes is still one in the right direction".

Jerry Shriver of USA Today felt that "within the realm of memorable breakup albums", Ghost Stories lacked "the confessional gut-punch of Dylan's Blood on the Tracks, the acrimony of Richard and Linda Thompson's Shoot Out the Lights and the irresistible sonic appeal of Fleetwood Mac's Rumours", ultimately describing it as "not even a particularly memorable Coldplay album". While noting that Ghost Stories "should be applauded for scaling back the gaudy excesses of their previous albums", Consequence of Sound's Josh Terry opined that its songs "suffer from a lack of direction" and "could use the vitality that launched them to the top in the first place". Mikael Wood of the Los Angeles Times wrote, "The nine songs on Ghost Stories hum gently, cultivating an effective sense of intimacy. As always, there's a lot going on in the music, sculpted by the band along with various collaborators." He added, "Coldplay's new album, Ghost Stories, finds the British band setting aside its trademark grandiosity.

All ongs written and composed by Coldplay , except "A Sky Full of Stars", co-written by Tim Bergling.

The typeface of the album is called "Golden Type ITC". 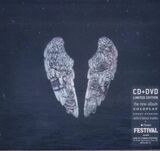 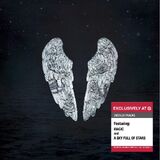 Add a photo to this gallery

Retrieved from "https://coldplay.fandom.com/wiki/Ghost_Stories?oldid=4424"
Community content is available under CC-BY-SA unless otherwise noted.